News
You are here: Home1 / News2 / News3 / Highlights From the State of the Union Address | America’s Most In-Demand J... 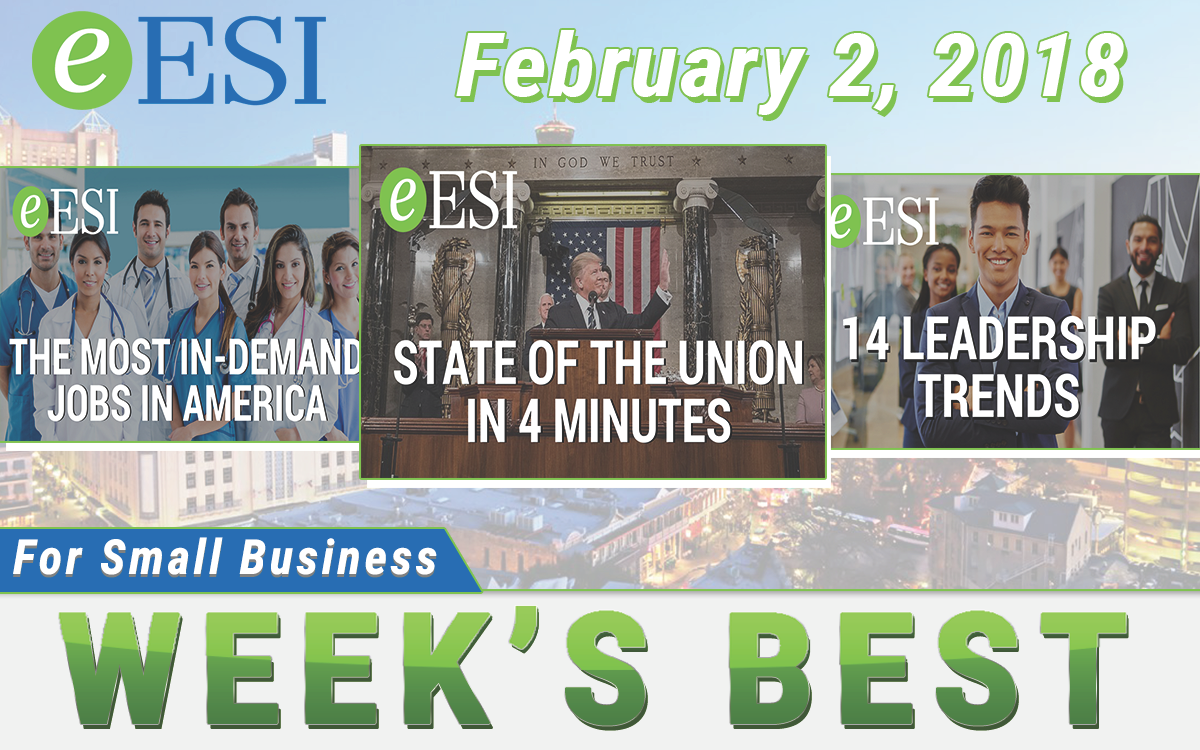 eESI Week’s Best For Small Business for the week ending February 2, 2018, includes highlights from President Trump’s State of the Union address. Plus, nearly 300 companies have responded to the passage of the tax reform law with increased employee pay and bonuses. Also, a look at the most popular U.S. jobs and a new initiative by three powerful companies to transform healthcare. News of a new bill to support caregivers, the EEOC’s top ten discrimination claims, and a special downloadable update on benefits round out this week’s best.

The President delivered a State of the Union address that highlighted the economic growth and increased business optimism that the country has experienced in the past year. The speech also touched on international issues ranging from security to trade. Though, as expected, democratic opposition was strong, the speech was generally well received by most viewers, according to post-speech polls.  Though the speech was the third longest in history, Fox News’ clip, Trump’s 2018 State of the Union in four minutes puts speech highlights together for your review if you missed it.

As of February 1, 2018, three hundred companies have responded to the GOP’s tax reform measures by issuing bonuses, raises or increasing 401(k) contributions. The Americans for Tax Reform’s John Kartch has been keeping track. He shares these latest results in List of Tax Reform Good News. Aflac, Home Bancshares,  KeyCorp, and Walt Disney Company are among the organizations who are celebrating the new tax law by distributing cash or benefits to employees.  FedEx, Lowe’s, Starbucks and Apple are among the 50 plus companies that announced increased employee compensation this week.

CNBC has been tracking Trump bonuses, too. In Lowe’s to give some employees bonuses of up to $1,000 and expand benefits due to tax reform, reporter Lauren Thomas shares what is known about the home improvement company’s decision.

As industries shift to automation and populations age, what jobs will be in demand? Entrepreneur’s Nina Zipkin shares an infographic from SmartAsset that lists the top 10 jobs of the future in Do You Have One of the Most In-Demand Jobs in America? What do the predictions tell us? In the future, both technology and humans will need caretakers.

How will management shift in 2018 and beyond? Forbes surveyed members of the Forbes Coaches Council to find out. The results are reported in 14 Leadership Trends that Will Shape Organizations in 2018. Fostering work-life balance and nurturing individual employee’s talents are high priorities for forward-looking leaders.

Speaking of forward-looking leaders and reshaping, three corporate influencers have healthcare stocks on the move and the employment benefits industry talking after announcing their plans to take on the U.S. healthcare system. SHRM’s Stephen Miller adds to the conversation in Could Amazon, Bershire and JPMorgan Transform Employer Sponsored Health Care?

The Email Ending That Gets an Answer

A Study of 300,000 Emails Says Closing With These 3 Words Prompts More People to Reply writes Inc. contributor Bill Murphy, Jr. According to the study, gratitude is the best attitude to have when you want someone to help you out. See the most effective closer in today’s article.

Caregivers Get Some Support From Congress

The Recognize, Assist, Include, Support, and Engage (RAISE) Family Caregivers Act was signed into law in January. Forbes’ contributor Robin Seaton provides an in-depth look at the act and its passage in Congress Passes, Trump Signs RAISE Family Caregivers Act ‘Elevating Caregiving To A Priority’. Employers should expect to see new regulations and guidelines on family leave and workplace flexibility as the provisions of the act are implemented over the next several years.

The EEOC’s 2017 fiscal year ended in September and its 2017 litigation statistics are now available. In Top 10 Employment Discrimination Charges in 2017, Claims Journal summarizes the major findings from the EEOC’s FY 2017 report. Of the 84,254 workplace discrimination charges filed by the EEOC in FY 2017, 48.8% included a count of retaliation. A count of retaliation was sometimes just one of several combined bases for a charge made by the EEOC. You can find the charges in second through fourth place in today’s article.

For the latest updates in benefits news, please download our February edition of Benefits Buzz. In this edition, we discuss the latest IRS filing deadline changes, repeal of the ACA’s individual mandate penalty, and the DOL’s inflation-based penalty increases for 2018.

VOLUNTARY BENEFITS – No Longer an Option