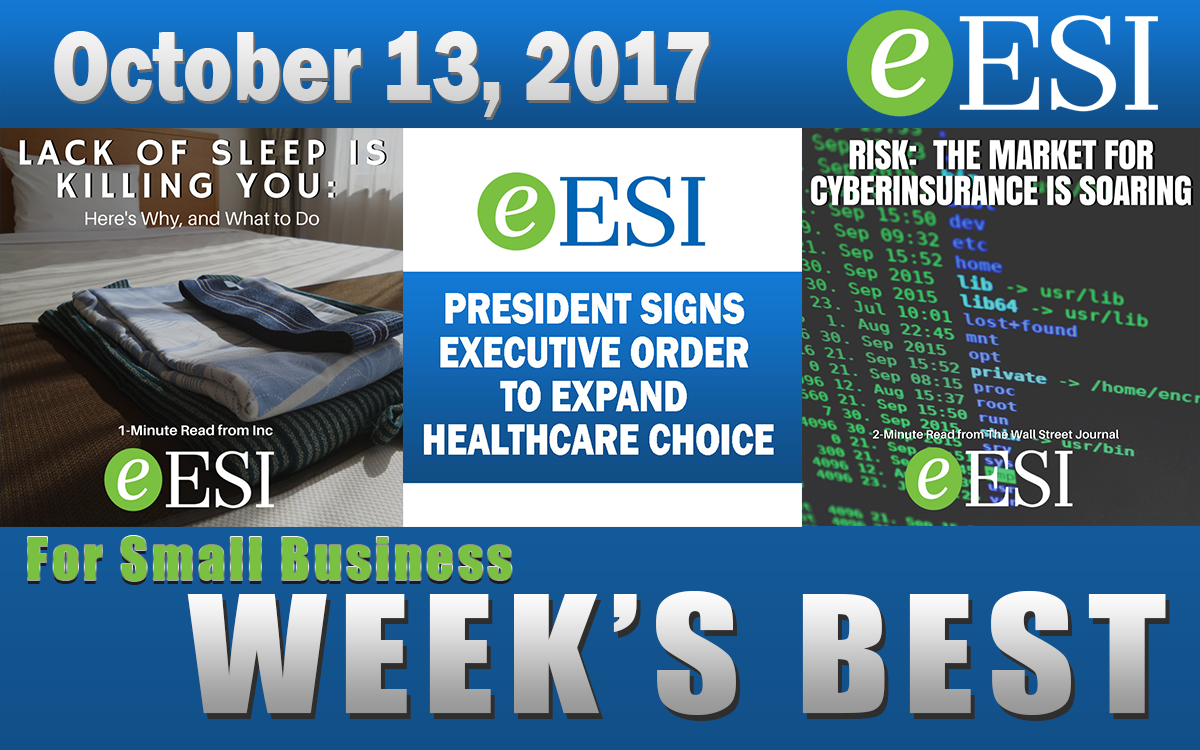 eESI Week’s Best: This week, President Trump issued an executive order to promote more choices for healthcare, small businesses evaluate the effect of the White House’s tax plan, and Equifax can’t seem to get anything right. Meanwhile, cyber insurance costs are going up, and a few tips to get more and better sleep.  Also, the latest in HR-related litigation and legislation.

On Thursday, President Trump issued an Executive Order titled Promoting Healthcare Choice and Competition Across the United States. The order is aimed at expanding the number of businesses eligible to participate in association healthcare plans (AHIs), extending the coverage period for short-term, limited-duration insurance (STLDI), and permitting greater use of health reimbursement arrangements (HRAs).

While implementation of the order may provide cost savings for some individuals and small businesses, the impact won’t be felt for several weeks as any changes will be effected through revision and replacement of existing regulations and guidelines by the Secretary of Labor. Meanwhile, Reuters reports that the White House says it can’t lawfully pay Obamacare subsidies due to a lack of appropriation and will now end these cost-sharing reduction payments to insurers – that will effectively undermine Obamacare.

Last month, President Trump issued his plan for tax reform including several tax cuts and other adjustments. Now, Entrepreneur’s Bill Smith takes a detailed look at the impact the proposal would have on small businesses in Breaking Down Trump’s Tax Framework and Its Potential Impact On Small Businesses. Included among the changes in the proposed plan are an elimination of the estate and generation-skipping transfer taxes and the Domestic Production Activities Deduction (DPAD). A reduction of the maximum tax-rate for pass-through income from 39.6% to 25% is also a part of the package.  Like Smith, most experts see Trump’s tax plan as a ‘win’ for small business.

Equifax has a serious problem and it is costing everyone, including its shareholders. CNBC reported that Equifax shares closed down 1.69 percent on Thursday after it was discovered that a consumer help page with code supplied by a third-party vendor might contain malicious content. Using the “well, technically, it’s not us, it’s them” defense, Equifax released a statement indicating that “its systems were not compromised” according to the CNBC report.

Equifax may be certain that it’s all good, but many other companies are not. According to the Wall Street Journal cyberinsurance has become a hot buy as companies seek to mitigate the risks of a hack attack.  In Insurance Grows for Cyberattacks, WSJ’s Adam Janofsky reports taht cyber insurance is the fastest growing segment in U.S. insurance markets.

What Keeps You Up at Night:

Lack of Sleep is (Literally) Killing You: Here’s Why and What to Do, According to Science writes Scott Mautz for Inc. Mautz cites several studies indicating that “the shorter you sleep, the shorter your life.” What to do? (Besides buying that cyberinsurance.) Change your mindset and learn to value sleep. You’ll get a few tips in Mautz’s article. Employers can also help put an end the the lost sleep epidemic by creating a workplace culture that encourages employees to leave their work at the workplace and get adequate rest.

Lack of documentation followed by a failure to respond cost a plaintiff the win in her action against her employer following a dispute over when she could return to work. SHRM’s Whitney R. Brown explains the court’s ruling in Employee Who Did Not Respond to Employer Loses FMLA, ADA Claims.

As Brown points out in her conclusion, the EEOC has guidelines restricting what documentation employers may request in return to work or accommodation situations. Make sure you know the rules, follow appropriate procedures, and maintain your paperwork to avoid expensive court losses.

What is a Joint Employee?

If only the government could decide. In House Committee Passes Bill to Redefine ‘Joint Employer’ at SHRM.org, Allen Smith explains the latest legislative attempt to pin down a definition. Currently NLRB case law permits a joint employer designation when one employer exercises only indirect or potential control.

The house bill is optimistically titled the Save Local Business Act and requires that only an employer who has direct control over an employee can be considered as a potential joint employer. If passed, the narrowed definition should come as a relief to small businesses, particularly franchises.

Dreaming of the Future:

If you aren’t getting enough sleep, just wait until this 2030 smart car arrives. Catch your zzz’s while your car handles the rest.