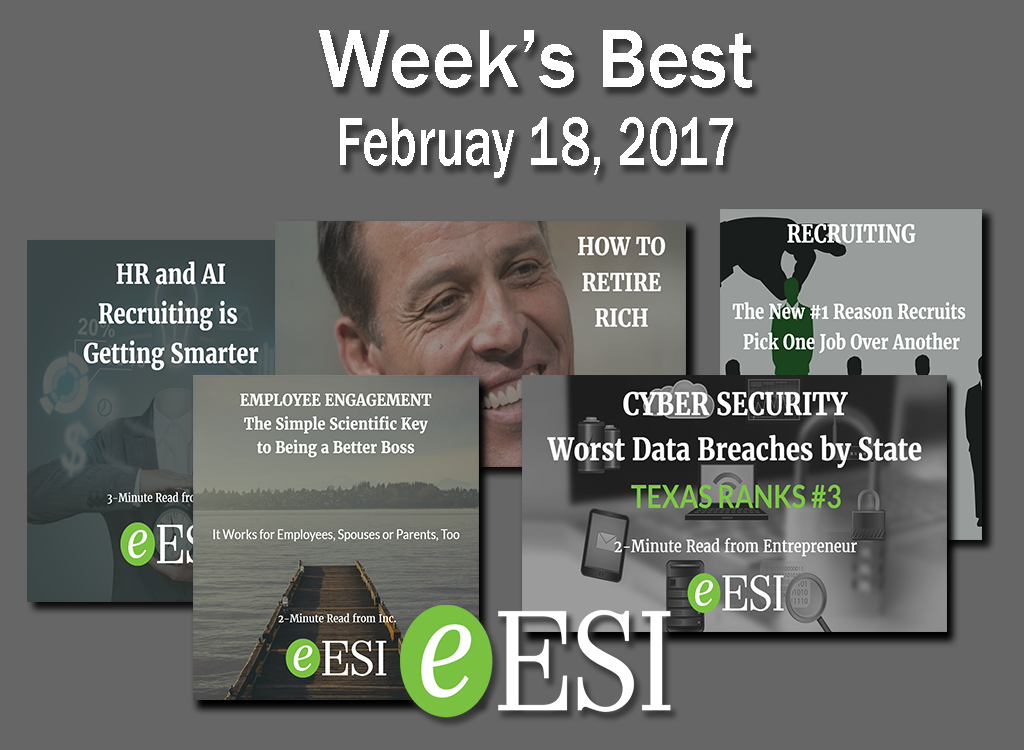 Welcome to the week of February 17th …

It’s been an active month thus far, especially in the Trump administation.  The President’s cabinet is slowly being filled: former Labor pick, Andrew Puzder, withdrew his nomination on the eve of confirmation hearings; but, new pick, FIU Law Dean Alexander Acosta, is reported to be highly qualified, and respected by both parties.  You can learn more about Acosta, and what he may mean to business in the story from SHRM.

To get caught up on the rapid changes in the marketplace, read Fast Company’s post on the Top 50 Most Innovative Companies …

Cyber Security is considered a top issue in 2017.  Last week, we highlighted an article in Forbes, Why Cyber Security Should Be the Biggest Concern in 2017, from a professional hacker that revealed the problems hackers are posing for small and mid-size companies.  This week, Entrepreneur posted The Major Data Breaches, Ranked by State – that reinforces the claims.  I don’t want to spoil for you where Texas is ranked, but it’s pretty high on the list …

In HR, SHRM posted two articles about trends in HR: Recruiting Gets Smart with AI reveals some of the impressive ways artificial intelligence is making the finding of top talent more effective and efficient ; and, there’s a new #1 in town when it comes to reasons job applicants select an offer; and, it’s not salary or benefits, though both are important. Learn about this trend in Candidates Choose Jobs Because Of Company Culture.

The House voted to Halt Government-Run IRAs for Small Business, a trend that had been endorsed by the Obama administration, but opposed for a variety of reasons by those in the business community. Learn more about the issue and its potential impact in this article from SHRM … Most people don’t know that they can lose 50% of their retirement savings in penalties if they don’t withdraw funds in time. Read Slavic 401k’s post, Avoid This 50% Hit to Your Retirement Savings to become informed on the subject, and to learn how to avoid the penalties.

This could be the year E-Verify becomes national law, according to a recent article in SHRM.  Iowa senator Charles Grassley introduced the bill to the Senate this week, and there seems to be enough support in both houses, and the White House, to make it a national mandate.  Up until this time it had been voluntary.

In Leadership, Justin Bariso’s Science says This One Thing Will Make You a Better Boss, Spouse and Parent  presents the results of studies on the importance of genuine praise – a topic we’ve covered before, but that warrants a re-visit because of its significant, and highly cost-effective impact on employee engagement and personal relationships.

In Productivity, Inc. posted an article from NY Times #1 Best Selling author, Tony Robbins, on How to Retire Rich, one of this week’s most popular posts.  His 4 main points are the result of dozens of interviews with those who have achieved their goal of retiring wealthy – worth a look … and, if you’re having a rough day, Entrepreneur‘s Rough Day?  Exercise and Sleep are the Best Ways to Shake It Off points out the most effective ways to handle difficult days, according to scientific research.

In Trends, Facebook is moving into TV and Video programming, and this week announced that it is moving into Job Postings, too – that article from Recode … and, Engadget reports that you may see the first Driverless Flying Passenger Vehicle in Dubai this summer.

Also in Trends, Geoffrey James posted that email remains one of the most important marketing trends for 2017 … but it doesn’t mean it doesn’t have its issues.  We’ll leave you today with a brief video that illustrates some of the frustrations we have all felt at times … enjoy!

eESI Week’s Best – STATE OF THE AMERICAN WORKPLACE | HOW AI IS CHANGING...
Scroll to top