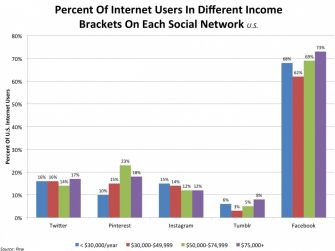 TLDR: Each social media platform has cultivated a unique identity thanks to the demographics of the people who participate in the network.

More and more small businesses are starting to integrate social media into their marketing strategies. Some firms have actually been utilizing social media for years and continue to expand into new networks to better reach out to their target audience. However, if small businesses are going to be using social media to market to consumers they should probably have a good idea of which demographics are using social media and how they are using it. This is important because when it comes to developing a marketing strategy a business needs to consider age and income. Indeed, income tells you what that consumer can afford and how they like to be marketed to, e.g. wealthier individuals want to be shown quality or exclusivity while lower income shoppers want to see value. Age is also important and that along with other interesting tidbits are explored in the following highlights of Pew Research data, “Facebook still skews young, but the 45- to 54-year-old age bracket has seen 45% growth since year-end 2012. Among U.S. Internet users, 73% with incomes above $75,000 are on Facebook (compared to 17% who are on Twitter). Eight-six percent of Facebook’s users are outside the U.S. Instagram: Sixty-eight percent of Instagram’s users are women. Twitter has a surprisingly young user population for a large social network — 27% of 18 to 29-year-olds in the U.S. use Twitter, compared to only 16% of people in their thirties and forties. LinkedIn is international and skews toward male users. Google+ is the most male-oriented of the major social networks. It’s 70% male. Pinterest is dominated by tablet users. And, according to Nielsen data, 84% of U.S. Pinterest users are women. Tumblr is strong with teens and young adults interested in self-expression, but only 8% of U.S. Internet users with incomes above $75,000 use Tumblr…”