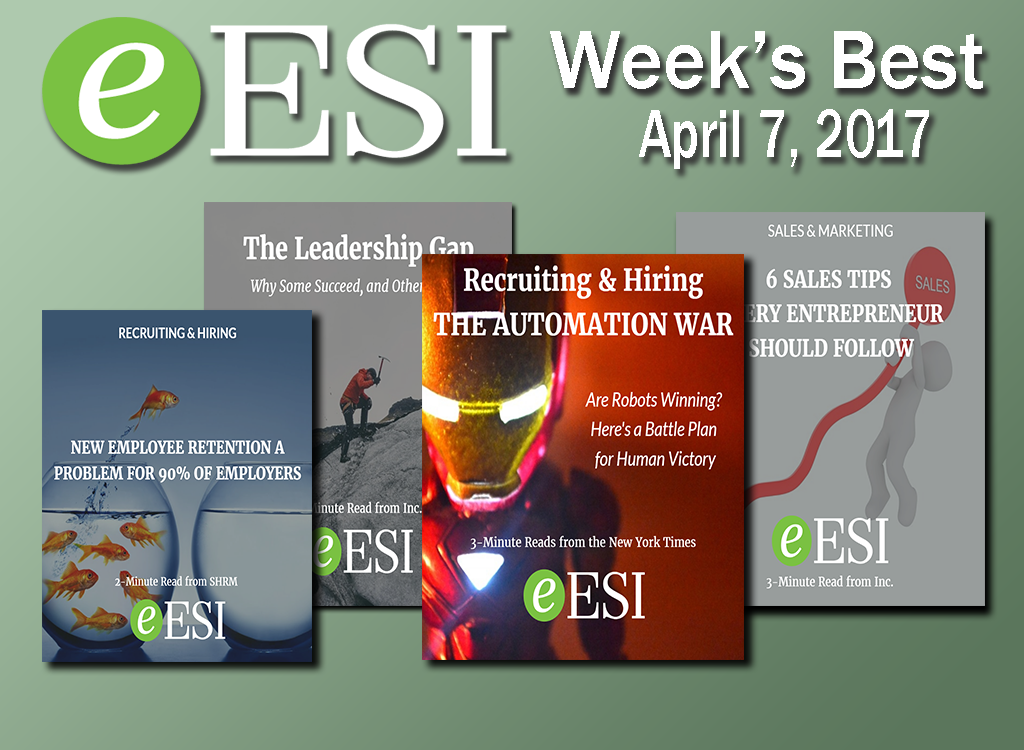 As we near the first 80 days of the Trump presidency, the U.S. has bombed Syrian airstrips where chemical weapons were launched; the unemployment rate is at its lowest rate since 2007, though the job numbers in March fell below expectations; Republicans confirmed the newest member of the Supreme Court in spite of a democratic filibuster attempt; and, the repeal and replacement of Obamacare is once again on the Presiden’t radar.

In the economy, Reuters reports the U.S. raid on a Syrian airbase led to a 3% jump for the week in U.S. oil prices ... CNN’s Money reports that March’s economic numbers reveal a significant slowdown in job growth, but the lowest unemployment numbers since 2007.  Experts believe the March numbers, following very strong months in January and February, are an outlier and not a trend.

In HR, eESI posted on an article about the Department of Labor’s Delay of the Fiduciary Rule … and, immigration compliance enforcement is getting serious under the new Trump administration, as the Laredo Morning Times reported on an ICE Raid that Nabbed 29 Criminal Aliens in Laredo; part of a 12-day sweep that also included the cities of San Antonio, Austin, and Waco.  Together, the total raid in the various cities resulted in the arrest of 153 criminal aliens … and, the Houston Chronicle reported that Waste Management Bosses in Houston were Sentenced to Prison for stealing the identities of U.S. citizens and using them to hire more than one hundred illegal aliens at the company.

Recruiting was the focus of several articles this week … Inc. posted 4 Behavioral Questions that uncover what a candidate is truly like … SHRM posted an article, Recruitment Marketing No Longer Trendy, but a Necessity, that reveals some of the practices now necessary to secure top talent … and, SHRM also posted ‘New Hire Retention a Problem for 90% of Employers‘ – a post that details the difficulty many employers have keeping new recruits.  The article also offers a few tips that can help you avoid the problem.

On recruiting, you can learn about 2017’s recruiting trends, and pick up tips from the best companies, by downloading our new eESI 2017 HR TRENDS Toolkit – simply click the link, fill out the two-line form, and DOWNLOAD!

In Sales & Marketing, Entrepreneur’s ‘6 Sales Tips Every Entrepreneur Should Follow’ contains advice and insights that can keep you and your sales team focused and productive.

In Productivity, Inc.’s Lolly Daskal recently published a book that details the differences between leaders who succeed; and, those that don’t.  Her article, ‘The Leadership Gap,’ shared findings about the 7 major leadership types and the things that helped individuals with those leadership styles succeed … Also in Inc., Jeff Haden published our highest rated post this week, ‘The Best Time to Exercise for Maximum Weight Loss and Mood Benefits.‘  The article reveals the results of a recent research study in Belgium that tracked individuals who were asked to increase their food intake by 30%, and their fat intake by 50%.  They then tracked people who worked out, didn’t work out, and who worked out at specific times of day.  The results will probably cause you to change the time of day you exercise.

In Trends, the New York Times reports on the U.S. jobs war between robots and citizens in ‘Evidence Robots are Winning the Race for American Jobs.’  But, the Times doesn’t give up without a fight; their article How to Beat the Robots provides strategies that can insure humans enjoy ultimate victory.  Both articles provide insightful evidence that automation is coming to most corners of the American economy.

We leave you with one of the world’s best TV ads this week from the Leo Burnett Agency in North Africa and the Middle East.  Their ‘Two for One Campaign’ for DU Telecomm was designed to encourage moviegoers to bring a friend; and, their humorous new ad, ‘The Man Sitting Next to You’ gets viewers to understand the potential benefits of attending movies with someone they know – and trust.  The campaign was developed primarily for mobile – one of this year’s biggest trends.

Enjoy the Ad, and your weekend.

Du Tuesday/ The Man Sitting Next To You from Ali Ali on Vimeo.