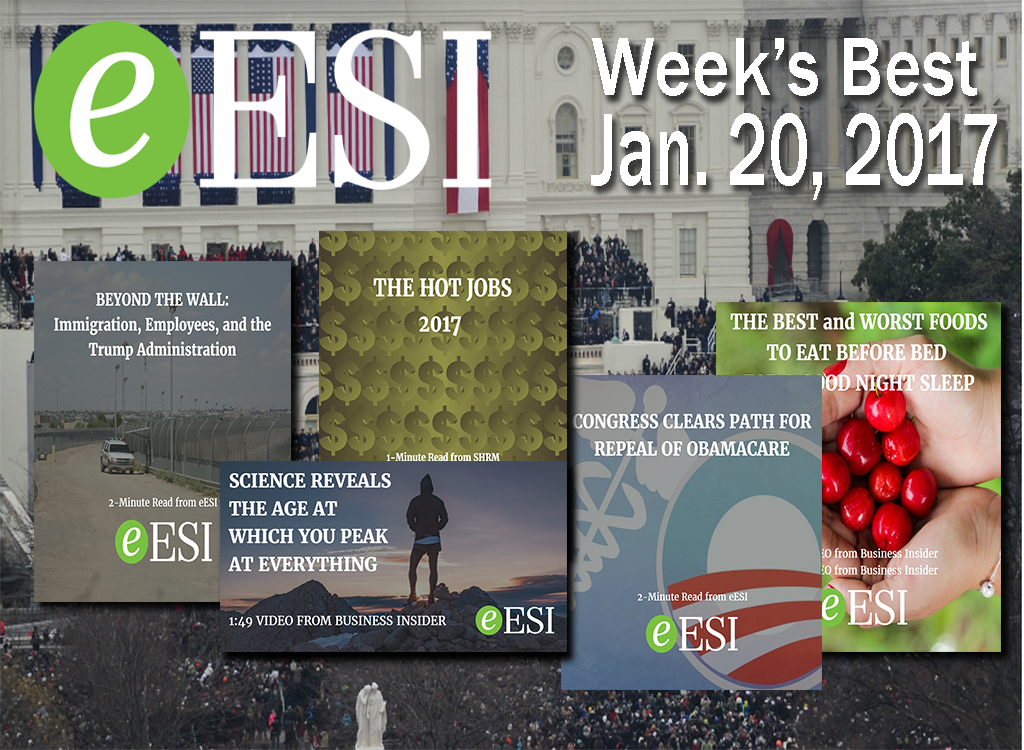 Inauguration day is here: Donald Trump was inaugurated as 45th president of the United States at 12:00p EST.  It promises to be an activist presidency.  If you did not see his speech, you can see the full speech here on CNN.

And, Obamacare is already being dismantled by Congress; now, both houses have passed resolutions clearing the way for its repeal and replacement – that story from eESI.

Already the President-elect is making good on promises to restore jobs in America, and it’s having an effect on Texas.  According to an article in the Texas Tribune, Trump recently met with Lockheed-Martin’s CEO, who afterward promised 1,800 new jobs in Ft. Worth …

In Leadership & Management, Harvard Business Review posted an article about ‘mindfulness’ that can help managers overcome reactionary habits, like anger.  Their post, Spending 10 Minute a Day of Mindfulness Can Change Your Reactions to Everything includes simple, yet practical steps that guarantee subtle changes that can help leaders stay in control in challenging situations … and, Science Reveals the Age at Which You Peak at Everything was a very popular video post this week from Business Insider that reveals at what age you’re the strongest, best able to handle math calculations, able to learn a second language, and several other things – an interesting view.

In HR, SHRM’s Professionals Prefer Promotions to Pay Raises cites the findings of studies that show advancement and growth are very important components of your employee development strategy, if you want to keep key talent in your company … the I-9 form has been changed; you’ll need to start using the new form soon.  Find out about the changes and deadline for using the new form in the SHRM post.

In Trends & Technology, Fast Company posted, Bet You Didn’t See This Coming: 10 Jobs that Will Be Replaced by Robots.  The article presents strong evidence about the inroads automation is making in many fields, and how those gains are costing jobs – some of which are in fields you may not have guessed … and, are you an Android or iPhone smartphone owner ?  Business Insider ran a story about 6 Things Android Phones Can Do that iPhones Can’t – some of which may be significant to you if you are considering a new smartphone …

In Personal Productivity, we posted three articles that stand out: First, SHRM posted an article, Stressed at Work?, that provides a list of insightful articles that can help you deal with a number of different kinds of stressors – a good read;  Inc. re-posted an article from Quora, 9 Toxic Habits that are Wearing You Down.  The post provides you a list of the nine habits, and simple, yet helpful recommendations for dealing with each one; and, lastly, if you want a good night’s sleep, what you eat can have a very significant effect.  We combined two different video posts from Business Insider to give you a list of the ‘Best Foods to Help You Sleep,‘ and also, ‘The Worst Foods if You Want a Good Night’s Sleep.’  Both videos show you four of the best and worst foods, and explain the research behind each one.

Well, 2017 promises to be an exciting year.  In trends, we spoke about automation: You are probably aware of the autonomous cars being tested by Uber, and others; and, the autonomous drones now beginning deliveries for Amazon in the UK.  We’ll leave you with one of the best ads of the week, a brand new spot for Mercedes-Benz that features their new ‘remote parking pilot’ – the automation future is becoming mainstream.