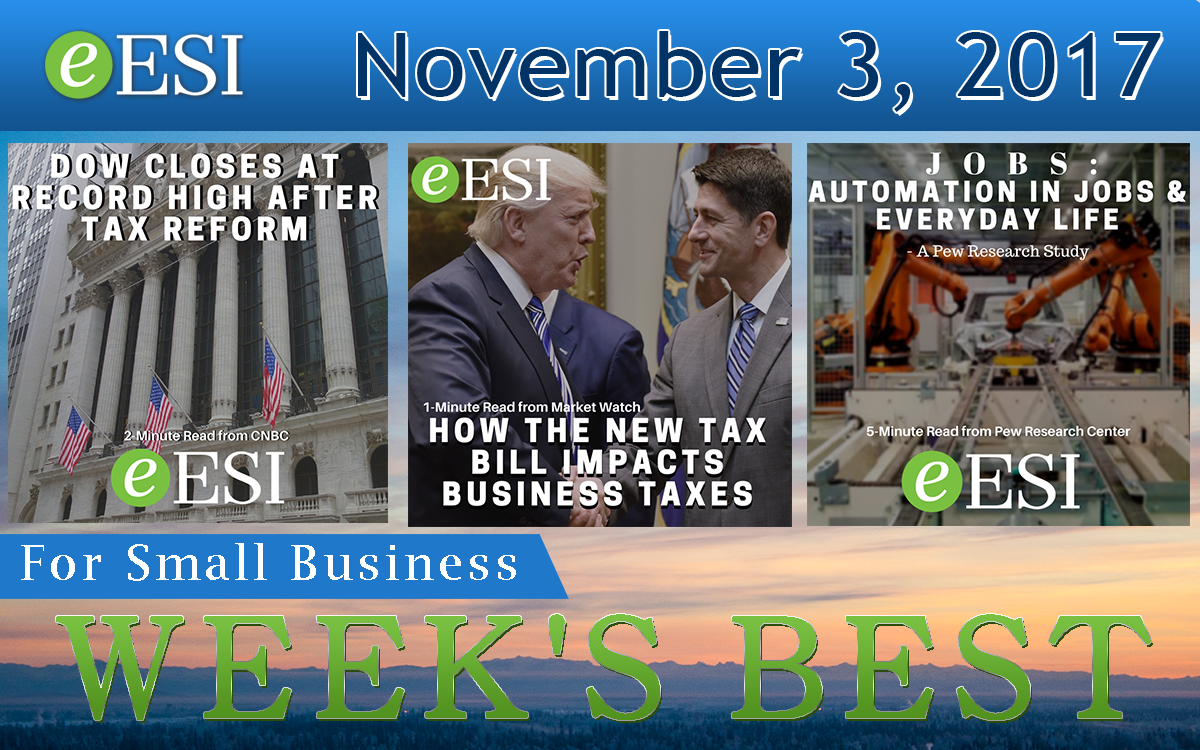 eESI Week’s Best this week includes big news in tax and finance, a look at the effect of automation in our lives, and tips to relieve stress. Also, this week in HR news we look at changes to the mandatory overtime rule and the proposed e-verify and farm labor bills. Plus, the social security base wage gets a raise.

CNBC reported that the Dow closed at a record high on Thursday after the release of the GOP’s proposed tax-reform bill, and the appointment of Jerome Powell as new Chief of the Fed. The plan’s proposal to lower the corporate tax rate to 20% might have something to do with the bullish reaction.

The proposed tax bill makes a lot of other changes, too. Personal exemptions are out and increased standard and child tax credits are in. MarketWatch’s Steve Goldstein sums it up in Here’s a breakdown of how the new House tax bill impacts your taxes. Meanwhile, Forbes contributor Tony Nitti offers his take on the proposal in Breaking Down the House Tax Bill: What’s In and What’s Out?

A new Chair for the Fed:

Survey says — Americans are stressed out about the level of automation in their lives. Pew researchers found tepid enthusiasm and more than a little concern expressed when they polled U.S. adults on the subject. Read the details in the Pew Research Center article, Automation in Everyday Life.

The American Psychological Association says we aren’t managing our stress well and we need to do better. Entrepreneur’s Rose Leadem is doing her part to help this week with a slideshow of 5 Ways to Reduce Work-Related Stress.

On Again, Off Again:

DOL Calls for Temporary Halt on Overtime Rule Case reports Allen Smith at SHRM. Litigation over the rule set by the Obama administration which raised the salary threshold for exempting workers has been placed on hold while the Department of Labor drafts a new rule.

In late October, the House Judiciary Committee approved the Legal Workforce Act and the Agricultural Guestworker Act to mixed reactions. SHRM’s Roy Maurer reports on the content of the proposed legislation and responses to it in his article,  Mandatory E-Verify, Farm Labor Bills Clear First Hurdle.

Also in October, the Social Security Administration announced that the maximum wage base for FICA taxes will increase by $1,500 in 2018. For details on the impact of this and other changes announced by the SSA, download a copy of the eESI release, Social Security Wage Base Limit Raised to $128,700.

It’s not often we include a sports clip in our Weekly Small Business best, but the Astros first ever world series win is an exception.  For those who didn’t witness the magic this week, and for those who just want to re-live it, we leave you today with one of the best highlight reels (11:17) of the Astros playoff and championship run.